Where is the Housing Market Headed? 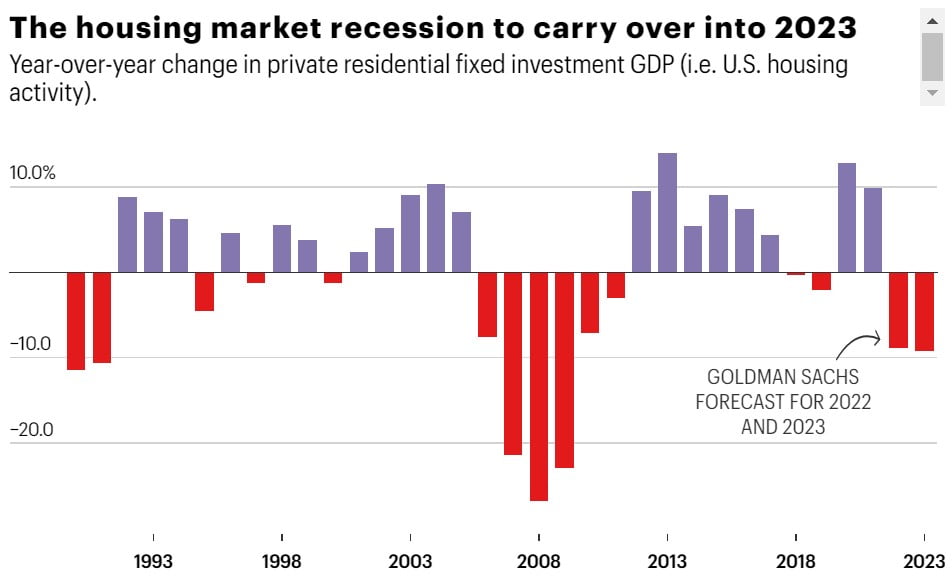 Where is the Housing Market Headed?

Summary – Where is the Housing Market Headed?

During the past decade, housing prices in the U.S. have appreciated at a rate that rivals the pre-2008 run up. Bullish sentiment has become bearish, and 4 key danger signals point to an explosive situation for U.S. housing. (1) Rising mortgage rates, (2) slowing price appreciation YOY, (3) falling home sales, and (4) accumulating inventory are signs the market is souring. I would like to advise investors to be very cautious with their stock market exposure and capital allocation. Consider underweighting cyclical industries such materials, construction and homebuilders.

“The whole housing sector is now in retreat,” says Pantheon Macro chief economist Ian Shepherdson, noting the latest data shows that multi-family starts have peaked after surging since early 2021 and reaching record levels under construction. Shepherdson predicts the downtrend in construction activity will continue to fall until early 2023, given that mortgage applications have plummeted 30% from a December peak and have yet to find a bottom.

Cover Image: On Tuesday, researchers at Goldman Sachs released a paper titled “The Housing Downturn: Further to Fall.” The investment bank now forecasts that activity in the U.S. housing market will end 2022 down across the board. The firm projects sharp declines this year in new home sales (22% drop), existing home sales (17% drop), and housing GDP (8.9% drop). And don’t expect relief in 2023. Goldman Sachs projects further declines next year in new home sales (another 8% drop), existing home sales (another 14% drop), and housing GDP (another 9.2% drop).

Rising mortgage rates pressure the availability and affordability of home purchase funding. The 30-year fixed rate average mortgage rate in the U.S. has more than doubled since early 2021, rising from 2.65% to 5.7% as of August 2022.

Price Appreciation is on the Decline

While home prices have not declined (broadly), the price appreciation of houses has sharply decelerated in the US.

The number of nationwide home sales dropped by 19% year over year in July. New home sales are falling rapidly.

Toll Brothers, Inc. (TOL), the U.S.’ largest builder for luxury homes, recently announced earnings for the second quarter (June). The company recorded a decrease in quarterly orders by 60% from a year earlier and has since cut its sales outlook, citing rising interest rates and slowing housing demand as key challenges.

In July 2022, new listings declined for the first time since March. This suggests that some homeowners are reconsidering their plans to list in light of trends like declining numbers of homes under contract.

Levels of inventory are climbing across the US.

Housing inventory is seeing meaningful recovery, active listings rose in July at a record annual pace — up 30.7% — for the third month in a row. Total Housing Inventory in the United States averaged 2309.49 Thousands from 1982 until 2022, reaching an all time high of 4040 Thousands in July of 2007 and a record low of 860 Thousands in January of 2022.

Data indicates that homeowners grappling with the decision to sell now are still in a good position in many markets, with buyer interest keeping well-priced homes selling quickly.

Between supply and demand trends, July data indicates that softening buyer interest is the bigger driver of accelerated inventory improvements. With typical monthly mortgage payments now 1.5 times higher than in July 2021, recent home sales data shows that many buyers are putting their plans on pause, which is giving active listings room to grow.

The number of housing starts, or ​​new houses on which construction has started, plunged 9.6% to about 1.4 million last month despite average economic projections projecting more than 1.5 million starts, the Census Bureau reported Tuesday.

Building permits were slightly above expectations at nearly 1.7 million, but fell about 1.3% from June and are down from about 1.8 million in April. Builders continue to respond to a pullback in demand.

Fitch Ratings recently released a note warning that the likelihood of a severe downturn in U.S. housing has climbed as homes have become increasingly unaffordable for most Americans.

Relocation due to Inflation

Joel Berner, senior economic research analyst for Realtor.com, has said “people are eager to move to new areas offering relatively lower living expenses in the face of high inflation, more outdoor recreation, jobs in different cities, working for their old office from home in a new locale and more. As a result, we’ve seen Cross-Market Demand increase in every quarter since 2020 at the peak of pandemic lockdowns, a marked shift and one to keep an eye on as Americans progress further into the new normal.”

1 thought on “Where is the Housing Market Headed?”