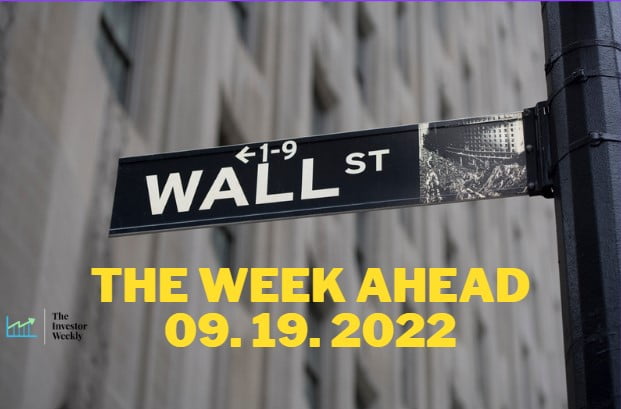 The S&P 500 posted its worst weekly performance since June, falling 4.78% for the five-day session. The loss comes on the back of a solid 3.65% gain last week.

Market participants saw selling pressure start on Tuesday after a hotter-than-anticipated consumer price inflation report, with the headline print for August rising 8.3% from a year ago.

The sell-off continued after FedEx (FDX) pulled its full-year guidance and warned it will continue cost-cutting initiatives. Management is concerned with slumping global shipment volumes amidst a significantly worsening global economy.

The market looks set for a lower open on Monday, with stock index futures down another 1% as investors display more nervousness about the Fed decision later in the week. The central bank is expected to raise interest rates by another three-quarters of a point, though there are calls for a 100 bps move, after the August CPI figure showed that inflation has not peaked yet. All of the major averages are coming off their worst week since June, as well as their fourth weekly loss in five weeks, while the benchmark S&P 500 (SP500) just broke below a key support level watched by many traders.

We Continue on the Road to Recession

FedEx (FDX) sounded the alarm on macro weakness, causing markets to tank earlier in the week.

Markets recorded their worst day since the steep pandemic-driven volatility seen in 2020. The Dow (DJI) plunged nearly 1,300 points on Tuesday, leaving the index down 14% in 2022, while the benchmark S&P 500 (SP500) and tech-heavy Nasdaq (COMP.IND) tanked 4.3% and 5.2%, respectively, leaving them off 17% and 26% YTD. Driven by option activity, the selloff accelerated into the afternoon, pulling every asset class deep into negative territory.

Going into last week, there were hopes that the Fed could ease up on its quantitative tightening cycle. Unfortunately, the Fed may now double down on its aggressiveness.

The CPI print rose 8.3% Y/Y in August vs. the 8.1% consensus forecast, while core CPI rose more than expected to 6.3%, from 5.9% in July. Gas prices have come down tremendously over the past 13 weeks, suggesting that price pressures are seeping into more parts of the economy.

The inflation report is one of the last the Fed will see before its September meeting. According to the CME’s FedWatch Tool, there is now a 1 in 3 chance the FOMC will raise rates by a full percentage point, while the probability of a half percentage point fell to zero.

A full-fledged recession could be around the corner, with rapidly rising borrowing costs pushing any prospects for a “soft landing” off the table.

Biden – A Double Dose of Foolishness

“Today’s data show more progress in bringing global inflation down in the U.S. economy,” President Biden wrote in a statement. “Overall, prices have been essentially flat in our country these last two months. Gas prices are down an average of $1.30 a gallon since the beginning of the summer. This month, we saw some price increases slow from the month before at the grocery store. And real wages went up again for a second month in a row, giving hard-working families a little breathing room. It will take more time and resolve to bring inflation down, which is why we passed the Inflation Reduction Act to lower the cost of healthcare, prescription drugs and energy.”

Continue to Focus on the Long-Term

The Nasdaq is down more than 25% YTD; S&P 500 -17.61% YTD; Dow Jones -14.70% YTD, and investing in a bear market is not the easiest, especially as stocks that may have been on your radar are nearing attractive entry points. But the key is focusing on fundamentals and selecting quality stocks, which is why I emphasize characteristics like valuation, growth, momentum, profitability, and EPS revisions before selecting stocks for a portfolio.

High inflation and rising food and housing costs are pressuring the Fed to raise rates. Growth and tech stocks are sensitive to these pressures because discounted future earnings coupled with high-interest rates can lead to less growth and profitability from an expectation perspective. When you look at some of the more popular stocks in the headlines, many retail and young investors tend to focus on short-term investing. The volatility that has taken over the broader stock market and resulted in losses is why investing for the long term typically results in lower volatility and weathers down markets.

CVNA, W, UPST, META, NVDA, PTON, AMD, SOFI, SPOT, while the appeal of buying at a lower price may prompt you to buy these growth and tech stocks, they come with extreme risks.

“Despite heated rhetoric, a dispassionate view of U.S. inflation prospects suggests that the Federal Reserve should back off a bit on their aggressive tightening path. That is not to say that inflation isn’t a problem – it is a severe one for households living from paycheck to paycheck. However, one thing worse than living from paycheck to paycheck is trying to live with no paycheck at all. With inflation cooling on its own, there is no reason for the Federal Reserve to push the economy into recession just to reach their inflation target faster.

Moreover, a key reason why the Fed should raise rates slowly is that they could reduce imbalances in both financial markets and the economy if they were able to maintain more normal positive real interest rates in the long run – something they probably won’t achieve if they feel the need to respond to a recession in 2023.

As for what the Fed will do, slightly higher-than-expected inflation in August probably locks in a 75 basis point rate hike this week, with Jay Powell making it clear that the Fed could so the same in November. If they do this, and then follow with a last 50 basis point hike in December, the federal funds rate will end the year at between 4.25% and 4.50% – two full percentage points higher than today’s level.

At that point, the Fed may well pause to see how the economy handles higher rates. They probably won’t like the answer, as high mortgage rates and a high dollar hurt housing and exports respectively and fiscal drag continues to slow consumer spending. The truth is, the outlook for the economy in 2023 is for very slow growth at best. Further aggressive Fed tightening may push it over the edge.

If this happens, it will entail the usual recessionary pain for laid-off workers and their families as unemployment rises. However, such a recession would likely snuff out any remaining inflation and a combination of low inflation and recession could prompt the Federal Reserve to cut rates later in 2023. While this would do little to spur investment or consumer spending, it could lead to a return to the slow-growth, low-inflation, low-interest-rate environment that prevailed over most of the second decade of this century. As such, it would be an uninspiring environment for families but could be a very profitable one for investors willing to put money to work today.” – D. Kelly