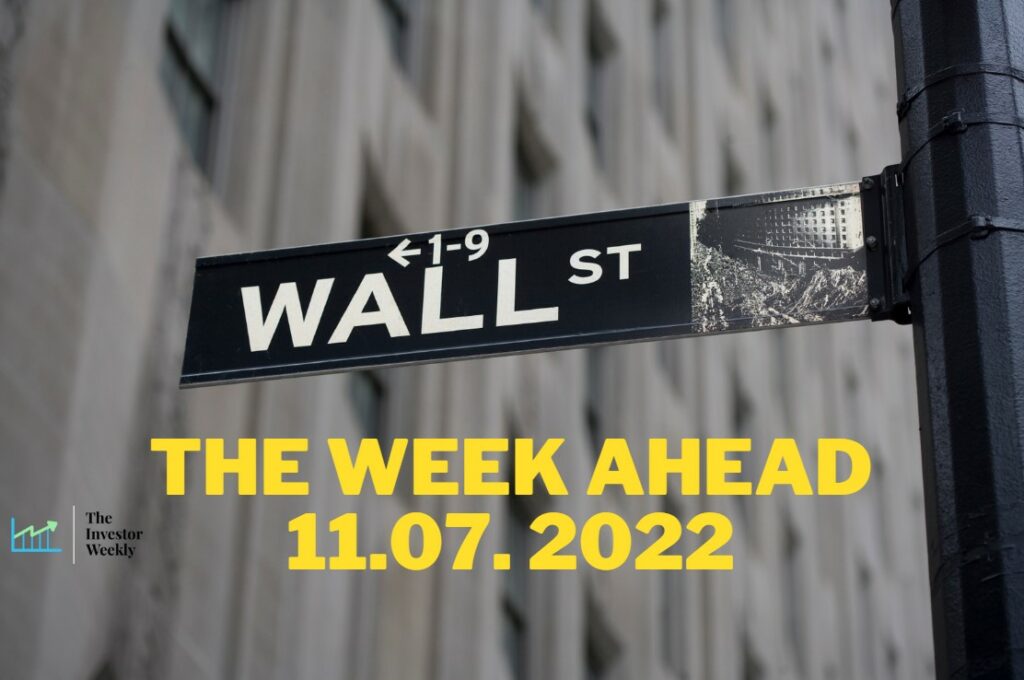 The U.S. election on November 8 is likely the most newsworthy event this week.

The consensus expectation is that a divided government between the White House and Congress will lead to more political gridlock and a potential slowdown of Biden’s Leftist agenda.

The stock market has outperformed with a dividend government over the returns generated in the years following the same party controlling the Senate, the House and the Presidency. However, a scenario that could rattle the market would be any lack of clarity with regard to Senate control if results are contested.

U.N. climate talks in the Egyptian resort of Sharm el-Sheikh, known as COP27, get underway this week, with many of the parties looking for concrete pledges to combat the damaging effects of climate change. It’s a trend that’s been seen since the 2015 Paris Agreement to curb warming at 1.5 degrees Celsius above pre-industrial levels, where progress is yet to be made despite many workshops, summits and conferences. Backlash against Coca-Cola (NYSE:KO), one of the planet’s biggest users of plastic, erupted as soon as the multinational announced that it would sponsor the COP27.

Where Did We End Last Week?

Despite an inconclusive jobs report that contributed to choppy trading early in the session, stocks finished Friday (last week) with modest gains.

The advance allowed the major U.S. equity averages to break a four-session losing streak, which was fueled by the Federal Reserve’s refusal earlier this week to make a definitive pivot from its ultra-hawkish stance.

For the full week the major averages finished lower, with the Dow shed down 1.4%, the S&P off 3.4% and the Nasdaq clipping 5.7%. The tone was set when Federal Reserve Chair Jerome Powell warned that the ultimate level of interest rates will be higher than expected and China reopening hopes faded.

A lot of disruption is going on in the tech space. Take for example, the recent advertising debacle witnessed during Snap’s (NYSE:SNAP) earnings, which foreshadowed the stock plunges of Big Tech the following week. While it is no longer publicly traded, the fact that Twitter axed half of its workforce on Friday could inform investors in other social media platforms of what might be coming in the not-so-distant future.

Meta Platforms (NASDAQ:META) is planning to begin large-scale layoffs this week. The firings are expected to impact thousands of employees of the company’s more than 87,000-strong workforce. Shares of META have tumbled 35% over the past month and more than 70% YTD amid intensive spending on the metaverse and threats to the firm’s core social-media business (free cash flow tumbled 98% in Q3).

What is still to be seen is if any of the big editorial changes at Twitter will end up impacting Facebook, Instagram, Messenger or WhatsApp. So far, Musk appears to be making a lot of rules on the fly, and a tweetstorm over the weekend pointed to additional adjustments in the making.

News syndicates are reporting that Twitter is reaching out to dozens of employees who lost their jobs and asking them to return. Some of those who are being asked to come back were “laid off by mistake,” while others “were let go before management realized that their work and experience may be necessary to build the new features Musk envisions.”

BP (NYSE:BP) became the last of the Big Oil majors to report earnings last week. Profit came in at $8.2B in the third quarter, up from $3.3B recorded in the same period a year ago. The report came at a time when commodity prices have surged, with oil and gas prices fueling inflation, in the aftermath of the coronavirus pandemic and Russia’s invasion of Ukraine.

“Oil companies’ record profits today are not because of doing something new or innovative. Their profits are a windfall of war, a windfall for the brutal conflict that’s ravaging Ukraine and hurting tens of millions of people around the globe,” President Biden said. “My team will work with Congress to look at these options that are available to us and others. It’s time for these companies to stop war profiteering, meet their responsibilities in this country and give the American people a break and still do very well.”

Will There Be a Windfall Tax?

Talk of a windfall tax first circulated among progressives, like Sanders and Warren, but it is now gaining traction with mainstream Democratic.

Here’s what a windfall tax will do (in my opinion): It will disincentivize and reduce current production, leading to even higher prices. It would also hurt future hydrocarbon investment, which has been weighed down by a regulatory environment that focuses on greener technologies and fails to address supply and demand imbalances.

The Crude Oil Windfall Profit Tax Act of 1980 was enacted under the Carter administration. This legislation generated $80B in revenues over the next eight years before being repealed by President Reagan. U.S. crude production declined as much as 8% over the period, according to the Congressional Research Service, while Washington grew increasingly concerned that the tax had increased the nation’s dependence on imported oil. The CRS also cautions that despite the “windfall” name, it was really in excise tax, that was determined by calculating the “difference between the market price of oil… and a statutory 1979 base price that was adjusted quarterly for inflation and state severance taxes.” Better examples may be seen from the “war profiteering” levy enacted during WWI and a similar excess profits tax adopted during WWII.

The economics calendar will be dominated by the October consumer price index report.

Headline inflation is expected to fall to +8.0% in October from +7.8% in September and core CPI is seen moderating to +0.4% month-over-month from +0.6%. Services inflation is once again anticipated to be the primary driver of core inflation in October, although data on asking rents continues to suggest that a moderation is on the way.

Market earnings will go nowhere next year, according to the latest forecast from Goldman Sachs. Strategist David Kostin said S&P 500 (SP500) margins have inflected downward, and as a result, he is trimming the S&P EPS forecast for 2023 to 0% growth from 3%.

“In a [moderate] recession, we expect S&P 500 EPS would fall by 11% to $200. Our economists assign a 35% probability of recession in the next 12 months and note that a recession would likely be mild given the lack of major financial imbalances in the economy. However, many equity investors believe a recession will begin at some point during 2023. A deeper or more prolonged recession poses downside risk to our recession scenario EPS. Revisions to bottom-up 2023 EPS estimates have been particularly sharp this year, but we see room for further cuts.”

Earnings will also continue to roll in next week, with Disney (NYSE:DIS), Rivian Automotive (NASDAQ:RIVN), Roblox (RBLX) and Nio (NIO).

The earnings season has been lackluster so far in general with only 70% of S&P 500 Index companies posting better-than-expected earnings compared to 85% a year ago and 24% missing EPS estimates vs. 13% a year ago. Outside the U.S., it will be another week of reading the tea leaves in China with Apple (AAPL) supplier Foxconn in the middle of a lockdown region that is slated to run through November 9.

The one-year anniversary of the Rivian Automotive (RIVN) IPO arrives next week. Shares of the electric vehicle maker soared to as high as $179.47 following the splashy debut and traded with a market cap above the valuations for Ford (F) and General Motors (GM) for a while. With shares now down 82% from their all-time high, the investor vibe on Rivian is much different with higher interest rates, supply chain snarls, and risk-off trading in the mix. The EV upstart still has bullish support on Wall Street, including from Morgan Stanley (Overweight, price target $60) with its long-term thesis. Analysts there believe that the company should be able to get through most or all of FY23 before a capital raise is needed. “

We believe further control of spending/cash burn + improved production ramp leads nicely to increased disclosure and around potential IRA benefits which can support Rivian’s aggressive battery cell and module on-shoring plans through the FY24 horizon,” updated the firm. Rivian is due to report earnings on November 9.

The IPO lockup period expire for a block of shares of Bausch + Lomb (BLCO).

Zoom Video Communications (NASDAQ:ZM) will hold an Investor Day on November 8 to cover business strategy, opportunities, metrics, and initiatives. The presentation takes place during the company’s Zoomtopia event, which has been a share price catalyst in the past. Companies holding investor day events on November 9 include Phillips 66 (PSX), Procore Technologies (NYSE:PCOR), and First Republic Bank (NYSE:FRC). Also keep an eye on Okta (NASDAQ:OKTA) with the company’s Oktane22 Keynote and Investor Day expected to turn heads. Shares of Okta have rallied in the past after the annual event. Fisker (NYSE:FSR) will be closely watched at the end of the week with the electric vehicle maker holding a factory tour and offering test drives for analysts and journalists at Magna’s facilities in Austria. The sneak peek comes ahead of the November 17 start date for production of the Ocean electric vehicle.

Investor tactics: Investors looking to play short-term volatility have a new roadmap to consider. Evercore ISI recently updated its TAP list, which is comprised of tactical calls made around near-term events expected to have a short-term impact on share prices impact.

Tesla (NASDAQ:TSLA) is the cover story this week as the publication dives into the question if the Twitter distraction will knock the company off track at a critical time. Some critics have warned that a preoccupied Musk could create anxiety with investors just as the Berlin and Austin Gigafactories ramp up production to meet the company’s 50% annual growth target. Meanwhile, bullish-leaning analysts have reminded that Tesla’s (TSLA) management bench may be much deeper than it is given credit with Franz von Holzhausen (design chief), Ashok Elluswamy (driver-assistance software), and Lars Moravy (vehicle engineering) all said to be executing at a high level autonomously. One of the pullouts from the Barron’s breakdown is that the best thing Tesla can do right now is to focus on branding Tesla as Tesla.