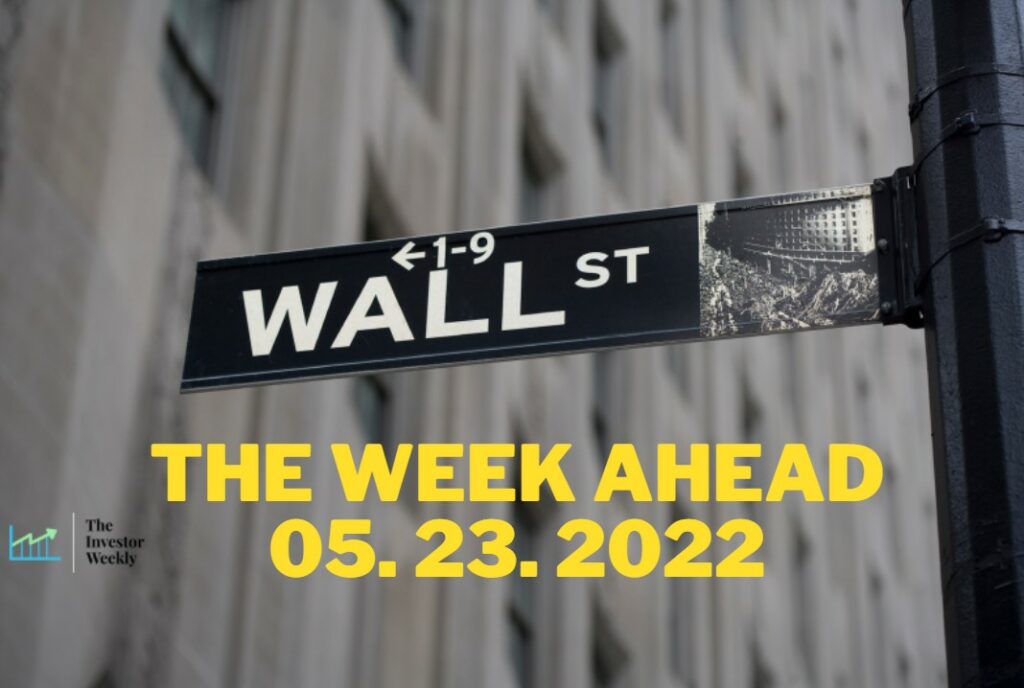 The S&P 500 Index tracked backwards on Friday to avoid official bear market territory. We have now logged seven straight losing weeks. This is the first time this has happened in more than 20 years.

Investors are nervous going into next week with more retailers due to report. Target and Walmart announced lackluster results, in the face of inflationary pressures and supply chain woes, which precipitated broad selling across sectors. Costco, Best Buy, Advance Auto Parts, Nordstrom, Dick’s Sporting Goods and Macy’s are a few reports to watch from consumer-facing companies this week.

The Fed is back on the circuit this week and FOMC minutes will be released just as traders began to assess the impact of recession talk on future rate hike plans.

On the corporate calendar, JPMorgan will hold a key analyst day event. And annual meetings at McDonald’s and Amazon will also take place.

Zoom Video surged more than 17% after announcing first quarter results.  Advanced Auto Parts and Heico also reported late. And Snap crashed 30% after warning that Q2 revenue would be below its low end of guidance. AAP shares fell about 2% in extended trade. And Heico stock edged higher after reporting better-than-expected results.

On Monday, the Dow Jones Industrial Average jumped 2%, while the S&P 500 moved up 1.9%. The tech-heavy Nasdaq composite advanced 1.6%.

Dow Jones leaders Chevron and Exxon Mobil are among my top stocks to watch for Tuesday.

Shares of Upstart dropped as much as 20% on Friday after Wedbush dropped its price target for the company. These price targets are based on the next 12 months, rather than the long-term, so investors might want to avoid putting undue reliance on them. However, Upstart had a rocky quarter recently, with a few causes for concern.

After a strong quarter, shares of Palo Alto Networks popped almost 10% on Friday. The cybersecurity company surpassed top-line estimates for its third fiscal quarter, and it even boosted its fiscal-year outlook. It now sees sales jumping 30% to 31%, which was higher than the previous 25% to 26% growth expected. The cybersecurity space is only getting bigger.

The agricultural equipment company Deere dropped 14% on Friday, despite beating analysts’ profitability estimates. What the company missed, however, was its revenue. The company reported net revenue for its second fiscal quarter of $12 billion, which was much lower than Wall Street’s expectations of $13.4 billion. This was caused by supply chain pressures that took a toll on delivery times.

The major stock indexes posted gains Monday. Monday’s action was a step in the right direction following last week’s selling, but it wasn’t enough to switch the market back into a confirmed uptrend.

The underlying uptrend remains intact, bit it’s time to play defense and maintain a cautious stance after heavy selling last week. Be careful about new purchases by focusing on stocks with the best fundamentals and price action. To be sure, there are few good setups among leading stocks.

Volume was significantly lower than on Friday, off 17% on the Nasdaq. In the prior session, trading may have gotten a boost from equity and index options that expired the same day. Even then, the slower activity suggested that institutional investors held back from committing much capital to the market rebound.