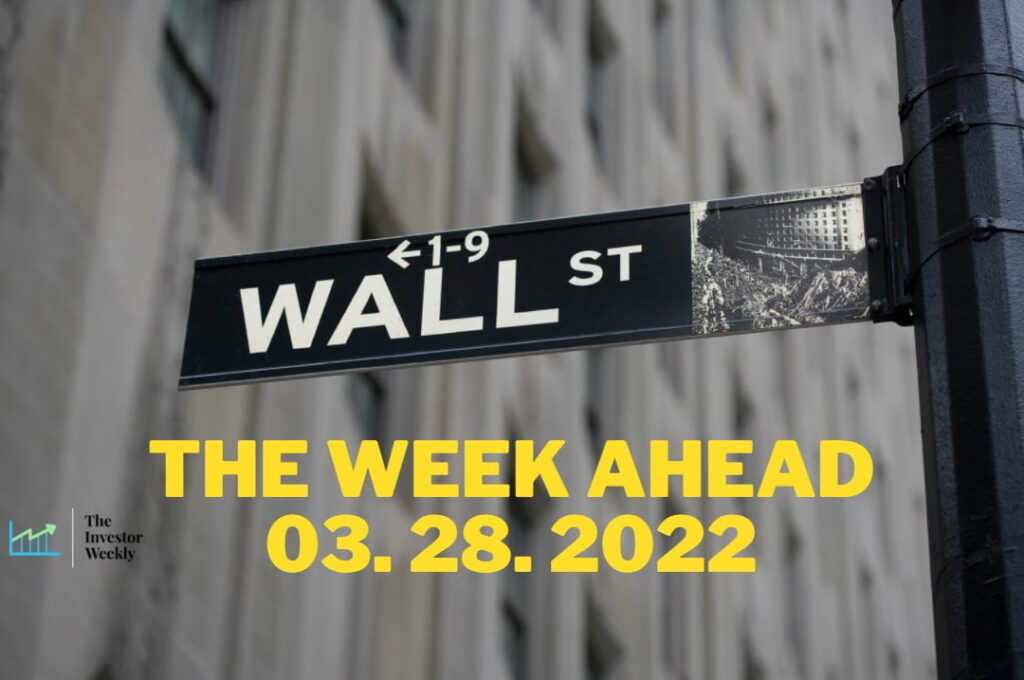 Crude oil advanced to $120 per barrel last week on the heels of drone attacks in Saudi Arabia. Saudi Arabia, the world’s biggest crude exporter, has suffered regular drone and missile attacks carried out by Yemen’s Houthis on its territory over the past two years.

Houthi military spokesman Yahya Sarea said on Friday that Yemen’s Houthis attacked a Saudi Aramco oil facility in Jeddah as part of a wave of drone and missile assaults as a huge cloud of smoke was seen near the Formula One venue in the city. LINK

“Saudi Arabia warned this week that oil supplies are at risk and called on the U.S. to do more to counter attacks from the Iran-backed Houthis — a message it reiterated Friday.” – Bloomberg

The energy sector helped the S&P 500 gain 0.5% on Friday and 1.8% for the week. With oil supply so tight, energy stocks are climbing. Halliburton, Exxon Mobil, and ConocoPhillips have all made some serious gains this year. Occidental Petroleum shares have doubled. OPEC will hold a meeting this week during which the group is expected to keep current production plans in place. This will create no relief at the pumps. Crude oil prices continue to trade at a 14-year high and the IEA has warned of the impact of losing Russian oil.

The Nasdaq fell slightly on Friday but led the major indexes for the week with a 2% rally.

The war in Ukraine shows little sign of abating. Interest rates continue to move higher and the Fed remains on track to raise rates throughout the year.

2 Year yields rose 0.15% and the 10 Year added 0.12% on the week. The Fed raised its benchmark rate for the first time since 2018 and has pledged to keep hiking to slow inflation that is running at the fastest pace in four decades. Traders are betting the central bank will boost its benchmark by at least 2.00% by year-end.

NKE posted great numbers last week and rose 5.5% in after-hours trading on Monday. Revenues climbed 5% year over year, while EPS came in at $0.87, which topped analyst estimates of $0.72. Apparel sales and direct-to-consumer sales led the way. The later was up 15% during the quarter.

The company is looking at mid-single digit revenue growth in 2022E versus the prior year.

The market continues to react to anticipated aggressive actions by the Fed to quell the threat of inflation. The yield curve is moving closer to inversion, which is an indicator of a coming recession. Treasuries are slumping, sending a closely-watched part of the U.S. yield curve to its first inversion in 16 years. The curve, as measured by the gap between five and 30-year yields, inverted for the first time

since 06, as a sell-off in the bond market resumed. Short-dated yields jumped to their highest since 2019.

Parts of the yield curve, namely five-year to ten-year and three-year to ten-year, inverted last week. And the gap between five- and 30-year maturities raised concerns the U.S. central bank’s hawkish approach to tackling inflation might hurt growth. Investors are betting the Fed will tighten policy rapidly enough to risk a sustained slowdown in growth.

The Fed is likely to put the brakes on the economy – and do it sharply.

Wheat and corn futures continue to surge and the shares of the top 3 fertilizer producers are up big this year.

Supply shortages continue to grow for ingredients like nitrogen, phosphate and potash. The crisis in the Ukraine is further compounding the problem. Remember that the price of sanctions impacts a variety of European countries, not just Russia.

Jefferies is a Buy. I am a big fan of this stock and I think it has more than 50% upside on a long-term hold.

The dividend yield is now 3.7%. Jefferies has raised its quarterly dividend in each of the past 6 years including the latest increase to $0.30 per share which yields 3.6% on a forward basis. The last payment was in February and shareholders can expect the Q2 dividend in May. The company has also been active in buybacks, repurchasing about $269 million in common shares over the past year which reduced the share count by about 3.5%.

Lululemon is looking into selling its own line of running shoes. I think this will be a big revenue generator for the company despite analyst concerns. Several analysts are pointing to the fact that this will be a distraction from the company’s core business – potentially hurting margins. LULU is down about 14% year-to-date.

Despite this, the company’s rich valuation serves as a headwind to stock price. Looking at Lululemon’s historical P/E multiples, there is still some mean reversion risk left in the shares. Over the last ten years, the company has traded around 38x earnings. It is currently trading around 41x.

Overall, Lululemon is a great company, but I believe it’s best to wait on the sidelines as further downside appears highly probable.

I like FIVE going into an economic slowdown, declining consumer spend, and a possible recession. But I think the valuation remains high currently. It’s PE is 33x forward earnings. And its EV/EBITDA is 23x. Five Below has consistently been valued at a premium to its peer group, with the stock trading at average earnings multiple of ~37x since going public in 2012.

That being said, retail has been crushed since over the past 12 months. And FIVE has faired worse than its peers.

National health spending is projected to grow at an average annual rate of 5.4% for 2019-28 and to reach $6.2 trillion by 2028. That being said, I like Walgreens. The stock pays a 4% dividend and is fairly valued. The average sector dividend is 2.3%. Walgreen’s stock is a great way to protect against inflation risk and it offers a hedge against market valuation risks.

WBA’s consensus EPS estimate for fiscal 2022E comes in at $5.02 per share on revenues of $132 billion. The company’s forward earnings multiple of 9.4x looks very attractive compared to historic multiples.

I think that WBA could also experience some buying as the economic environment continues to wain and investors look for safe investments.