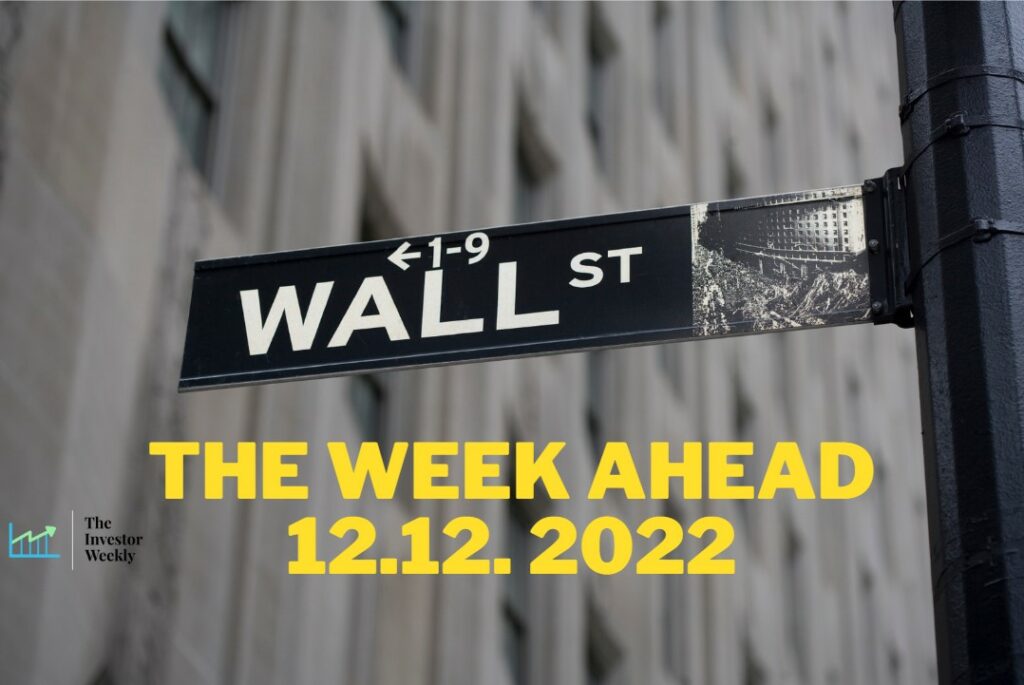 Stocks wrapped up their worst week since September 2022.

Recession fears continue to resurface after a hotter than expected report on wholesale price inflation.

The FED has a policy meeting this week. The Fed has delivered four consecutive 75-basis point increases to its benchmark rate. Economists widely expect the FED to raise rates by another 50 basis points this week.

Investors also are awaiting Tuesday’s report on U.S. consumer prices for a reading on whether inflation has receded.

Two of the biggest economic events that remain for 2022 hit the calendar next week, with the November CPI report and Federal Reserve meeting having the potential to set the tone for the remaining three weeks of the year. While a mild CPI print is not anticipated to jolt the Fed away from its hawkish stance, a flat reading or surprise to the upside could reset expectations for investors out in front of their skis for betting on an inflation peak. While the earnings calendar is razor-thin for the week, key events for Yum Brands (NYSE:YUM), Pfizer (NYSE:PFE), J.M. Smucker (SJM), Volkswagen (OTCPK:VWAGY) and Centene Corporation (NYSE:CNC) will keep investors on their toes.

The Federal Reserve will hold a two-day meeting of its policy-making committee with expectations high that the central bank will fire off an interest rate hike of 50 points.

Recent readings from the labor market continue to be strong.

The housing slowdown appears to be spreading into manufacturing and given economists differing opinions on how high the terminal interest rate will go.

Trading on the federal funds futures contract indicates almost an even split between a 25-point or 50-point interest rate increase at the February meeting.

Powell could reiterate his comments from a speech last week when he noted wage inflation plays a large role in core services inflation ex-housing and the only way to bring inflation back towards the target rate is to slow down the labor market.

Outside of Powell’s speech, the summary of economic projections will be closely watched with the median forecast for 2023 forecast to move up by 50bp to 5.125%.

A price cap on Russian seaborne oil came into force last week as the West tries to curb revenue flows to Moscow’s war machine. After intense negotiations, G7 nations and Australia agreed to a $60 per barrel price level. There exists an adjustment mechanism that keeps the cap at least 5% below the market rate and allows for revisions every two months.

Crude remains Russia’s economic lifeblood, especially after the country put a stop to natural gas sales to Europe (a move that was first attributed to maintenance problems and later to sanctions).

The deal allows Russian oil to be shipped to third-party countries using G7 and EU tankers, but only if the cargo is bought at or below the $60 per barrel cap. The level is seen as high enough to cover production costs and encourage more output, though

Ukraine’s Volodymyr Zelenskyy slammed the agreement, calling it “quite comfortable for the budget of a terrorist state.”

G7 insurance companies, credit institutions and transport services will also have to observe the price ceiling, which is important as 95% of the world’s oil tanker fleet is covered by the International Group of P&I Clubs in London and companies based in continental Europe.

While the industry is still awaiting a complete response from Russia, the Kremlin has said it will redirect its oil supply to “market-oriented partners” even if that means it will have to cut production. A presidential decree would also prohibit loadings destined for any countries that adopt the restrictions, and ban any reference to a price cap in contracts for Russian crude or oil products.

“We are working on mechanisms to prohibit the use of a price cap instrument, regardless of what level is set, because such interference could further destabilize the market,” said Russian Deputy Prime Minister Alexander Novak.

Taiwan Semiconductor Manufacturing (NYSE:TSM) recently made one of the largest foreign investments in the United States. The company announced plans today to build its second chip plant in Arizona, increasing its investment in the state to $40B. The event was attended by President Biden, as well as CEOs who will benefit from the increase in American chip production.

TSMC previously disclosed a $12B investment plan to build its first factory in Arizona that was slated to manufacture 5-nanometer chips with mass production expected in 2024. Construction on the second site that will make 3-nanometer chips will start in the coming year, with production set to begin in 2026. Once the plants come online, they are expected to deliver enough chips to meet U.S. annual demand of 600K wafers per year.

Bottom line is that this will create additional supply chain resistance. The passage of the CHIPS and Science Act in early August helped provide certainty to companies like TSMC to expand their footprint in the U.S. The bill included $52B in loans, grants and other incentives, as well as billions in tax credits to support domestic semiconductor production. Washington has been worried about reliance on microchips made in Taiwan for years. This dependence became more apparent during the pandemic, when supply chain issues affected everything from cars and electronics to healthcare equipment and advanced weapons systems.

Stocks in China ended the session down last week. The Hang Seng Index closed 3.2% lower. Investors appeared to be focused on trade data for November instead, which showed exports (-8.7% Y/Y) and imports (-10.6% Y/Y) shrinking at their steepest pace since 2020.

Outbound shipments will receive a limited boost from the easing of virus restrictions. It would appear that manufacturing capacity is not the issue here; of much greater consequence will be the downturn in global demand for Chinese goods due to the reversal in pandemic-era demand and the coming global recession.

The government has tried to respond to diminished growth by implementing a series of policy changes, like cutting the reserve requirement ratio of banks and loosening financing restrictions to save the property sector. China is also trying to loosen its severe COVID measures, though a full-blown relaxation of pandemic controls will take significantly more time and high-risk areas still remain subject to lockdown-like restrictions.

Asymptomatic or mild coronavirus cases are now allowed to isolate at home rather than at hospitals or quarantine facilities. Citizens no longer need negative tests in order to travel between different parts of the country, while Beijing became the latest city to announce negative tests won’t be needed to enter public venues.

It is clear that when it comes to implementation, there are a lot of inconsistencies between different departments and different regions.

Game over on this deal? The Federal Trade Commission, under the leadership of Lina Khan, dubbed “the antitrust enforcer,” voted 3-1 last week to block Microsoft’s (MSFT) $69B deal for game developer Activision Blizzard (ATVI).

The decision is a sign that Khan and the FTC will be more aggressive in cracking down on the biggest U.S. tech giants, who frequently grow their influence or fight off upcoming challengers via acquisition. The FTC feels that the MSFT deal could harm competition.

Activision’s Call of Duty and World of Warcraft are some of the most popular gaming franchises, and turning Microsoft into the No. 3 gaming company in the world could limit rivals’ access to titles or raise prices for other gaming platforms. The FTC also said it would give MSFT an unfair advantage in the new market for game subscriptions, as well as the emerging market for cloud gaming.

Microsoft has gone to great lengths to calm fears of its growing industry monopolistic power. For example, it is inking a deal to bring Call of Duty to Nintendo (OTCPK:NTDOY) for the next decade. A similar offer to Sony (SONY) on same-day access to the game on its PlayStation platform has so far been rebuffed.

The U.S. is not the only country where Microsoft will have to fight to close the deal. The transaction is also seeing resistance in Europe and the U.K. While the company initially took the concessions route, it now looks like it will be presenting its case in court. Investors need to prepare for a drawn-out battle that might include precedent of so-called vertical deals.

CVS Health (NYSE:CVS) is the subject of the cover story this week.

The author makes the case that investors should not give up on the stock even though the company’s big bet on primary care has not come to pass yet. CVS has mad little progress on the primary-care front has made the stock difficult to evaluate, but the ultimate goal of making the retail pharmacy into something that becomes a point of access into the healthcare system is still said to be in play.

On the valuation front, CVS shares trade at the bargain level of 11X earnings expected over the next 12 months, noted to be an attractive entry point for investors willing to bet the company’s long-term plans will deliver impressive results.