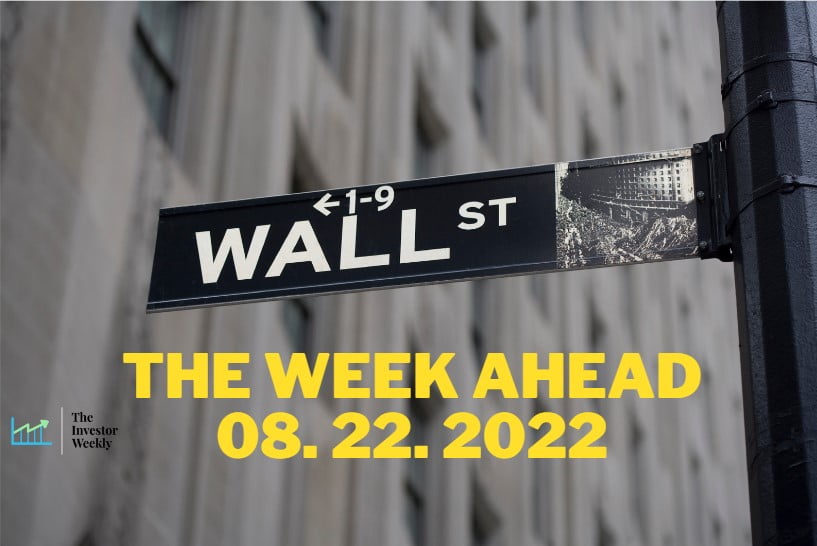 The focus of the markets this week will be on Jackson Hole and the tone from Federal Reserve members at their annual symposium.

1. The Fed meets at a time when some analysts are warning that frenzied trading in meme stocks and overconfidence in inflation being tamed could be a signal that investors are in front of their skies.

2. Economic reports this week could also disrupt, with updates due out on durable goods orders, home prices, PMI readings and the closely-watched PCE price gauge.

3. Earnings reports will come in from the consumer and tech sectors again, with Dollar Tree (NASDAQ:DLTR), Dollar General (NYSE:DG), Nvidia (NVDA), and Salesforce (CRM) some of the headliners.

The end of a four-week winning streak is challenging market participants as stock index futures remained in the red for the day.

While the S&P has climbed 15% since its low this summer, it is still down more than 11% for the calendar year. Fewer investors are calling for a complete market bottom at this time.

In the coming week, investors will get to see if there is remaining steal to this summer rally.

Could this be a Bear Trap?

Bear trap? This stock market rally resonates of bear market moves going back to the onset of the Great Depression. Bank of America Securities notes that the average S&P 500 gain in 43 bear market rallies of more than 10% going back to 1929 is 17% over 39 trading days, while in this case, it is up 17% in 41 days. This time around, 30% of the S&P’s gain is due to just four stocks – Amazon (AMZN), Apple (AAPL), Microsoft (MSFT) and Tesla (TSLA).

Whether the “Fed knows it or not, they’re nowhere near done.” Michael Hartnett, Chief Global Equity Strategist

Will he, or won’t he? Speculation is ripe around whether Buffett’s Berkshire Hathaway (BRK.B) will make a bid for full control of Occidental Petroleum (OXY) after receiving regulatory approval to buy 50% of the driller. FERC said its authorization was “consistent with the public interest” and subject to various conditions. Following the news, shares of OXY closed up nearly 10% at $71.29 on Friday, which comes on the heels of a blistering 146% YTD rally that makes it the best performer in the S&P 500 this year.

Buffett appears to be doubling down on the oil and gas sector. He also has a stake in Chevron (CVX) at a time when many consider it a dead business. The moves will help Buffet diversify an energy portfolio that includes several large utilities and electric distribution players, as well as renewable power projects.

Berkshire began accumulating its Occidental stake back in April after reading through the company’s annual report. The firm’s current 20% stake would even rise to nearly 27% if it exercised warrants accumulated during a 2019 deal that helped finance Occidental’s purchase of Anadarko Petroleum.

The Fed is still anticipated to raise the target range for the federal funds rate by 50 or 75 points in September and follow with 25 or 50 points hikes in November and December. Fed watchers are also looking for more details on the Fed’s balance sheet reduction strategy.

Chipmaker Nvidia (NVDA) will report earnings with investors skittish over another downward guidance revision to follow June’s announcement. Nvidia (NVDA) adjusted expectations due to a deterioration in gaming demand and weaker than expected data center revenue due to supply chain disruptions. Bank of America is positive on the report and said even a “second cut” could clear the decks ahead of the upcoming new 5nm gaming (Lovelace) and data center (Hopper, Grace) pipeline. Looking ahead, the Nvidia (NVDA) GPU Tech Conference from September 19-22 is seen as a major catalyst.

Dollar store earnings: The retailer sector hears from discounters Dollar General (DG) and Dollar Tree (DLTR) this week in reports that could show how much consumers are focused on cutting costs. In particular, watch for commentary from dollar store on if higher-income cohorts are in the sales mix.

I believe that dollar stores as positioned to take share amid the macro, supply chain, and inventory headwinds hitting retail. Consensus estimates on Dollar General (DG) are for revenue of $9.4B and EPS of $2.93 to be reported. Dollar General has beaten EPS estimates in 6 of the past 8 quarters, exceeding revenue expectations 7 times in that span. Dollar Tree (DLTR) is seen producing $6.78B in revenue and EPS of $1.60. Heading into the report, 18 of the last 21 EPS revisions on Dollar Tree have been to the downward side. Wells Fargo thinks guidance could surprise to the upside, with the two retailers have a higher degree of earnings visibility into next year than most others.

Haleon (NYSE:HLN) was featured in a recent Barron’s article this week, about a month after the company’s spinoff from GlaxoSmithKline (GSK). A buy recommendation is issued on the large-cap, pure-play consumer healthcare stock on the expectation for steady growth and income for investors. Haleon is known for selling oral health products like Sensodyne and Aquafresh; over-the-counter drugs, including Advil and Theraflu, as well as vitamins and supplements like Centrum. Haleon plans a dividend payout starting in the first half of next year at the lower end of a 30% to 50% range of earning. On the valuation front, Haleon is valued at 13.5X the consensus 2023 EPS mark, which is noted to be a lower multiple than other consumer healthcare products such as Unilever (UL) and and Procter & Gamble (PG).

Hedge Funds in the News

Growth stocks were favored by many large hedge funds in the second quarter.

Last Monday was the deadline for hedge funds with more than $100M in assets under management, as well as other institutional investors and endowments, to report certain stock holdings through 13F filings. The 13F season gives investors a glimpse into where the big players are betting, albeit with slightly dated information.

I put an article I authored on the QQQM a few weeks ago. You can see it here.

Who’s buying what? Among the big-name disclosures, Buffett’s Berkshire-Hathaway (BRK.A) (BRK.B) boosted its stake in Activision (ATVI) to ~68.4M shares from 64.3M. It also exited its stake in Verizon (VZ).

Soros Fund Management made a new investment in Tesla (TSLA) (~30K shares) and disposed of its stakes in MGM Resorts (MGM) and Solid Power (SLDP).

The Gates Foundation turned to autos with Vroom (VRM) and Carvana (CVNA).

Dan Loeb’s Third Point Capital revealed a new stake of 1M shares in Disney (DIS) in its filing, but added in a letter directly to the company that in recent weeks it had “repurchased a significant stake.” Third Point lobbied for a refresh of the Disney board, made its case for an ESPN spinoff and also asked the FTC for permission to engage directly with the company. Disney, however, defended the composition of its board and noted that members have an average tenure of just four years.