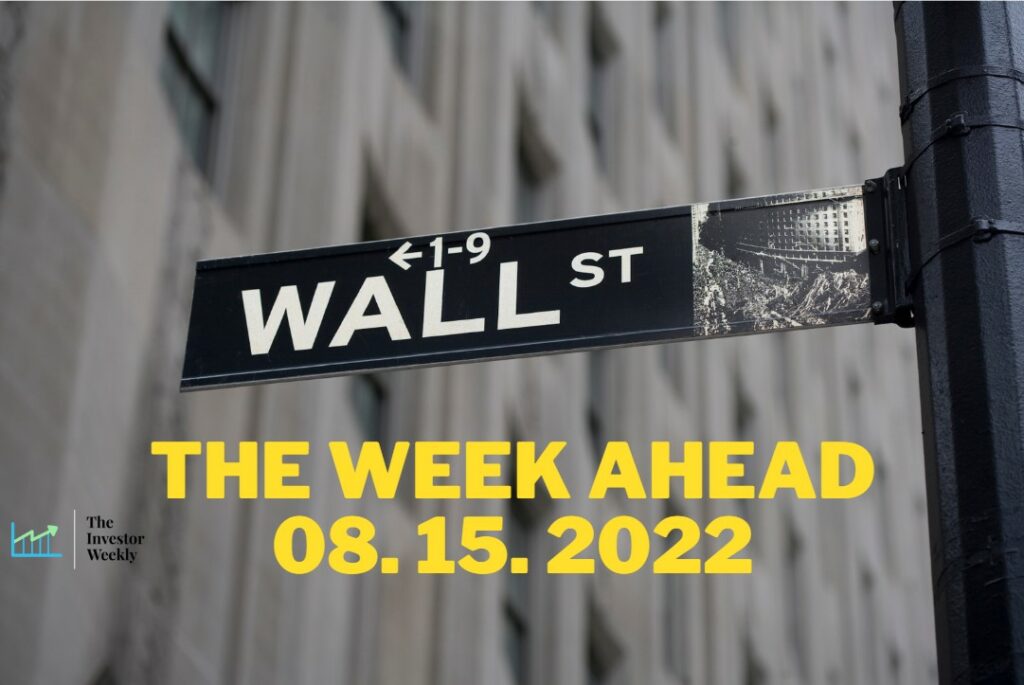 Stocks notched their fourth straight positive week with strong gains Friday. The monthly report from the University of Michigan showed a rise in consumer confidence, marking the second consecutive gain for the index since its June low. This upbeat data, coupled with a better than expected reading of the CPI earlier in the week, had some traders feeling euphoric that the worst inflation had passed and that the Federal Reserve might raise its main interest rate by just half a percentage point in September. This comes after two consecutive 75 bps increases.

The bond market continues to take a pessimistic view of the economy, with the spread between the two-year and 10-year yields deeply inverted at negative 41 basis points.

The S&P 500 and Nasdaq gained for the fourth week in a row, up 3.2% and 3.1% respectively, while the Dow jumped 2.9% for the week. See recent ARTICLE with technical analysis.

We will also get earnings reports from Home Depot (HD) and Lowe’s (LOW).

Walamrt (WMT) reports on August 16 with analysts forecasting revenue of $150B and EPS of $1.60. Ahead of the report, JPMorgan said recent data showed that the retail giant may be benefiting a from a “consumer trade-down effect as value shopping increases”.

Target (TGT) report on August 17. Despite a warning from the retailer in June on margins softening, analysts remain uncertain of what to expect. Morgan Stanley thinks it is possible Target cuts its full-year EBIT margin from the current implied ~5% level to ~4%. Analysts at Evercore ISI issued a negative call on the stock due to the expectation that the outlook for EPS and margins will weaken. Target (TGT) is confronted with more incremental pressure than Walmart (WMT) because it is more heavily levered to discretionary categories. Additionally, the stock is not snapped up as much as a defensive play in a sour economy.

Back to School Shopping – Surprise?

If there is a surprise to the upside for Target (TGT), it could be based off a positive read on how the back-to-school shopping season has started and the impact of receding gas prices.

The intense focus on inflation and interest rates continues. Last week numbers indicated a slight deceleration in inflation. This adds some intrigue to the release by the Fed on August 17 of the minutes of the last meeting. An analysis of the minutes will likely reinforce that members are committed to the inflation fight and the subsequent downside surprise in CPI may not alter the plan.

Fed members will meet in Jackson Hole at the end of August and have a additional inflation and jobs reports to digest before deciding whether an additional 50-point or 75-point rate hike at the September meeting is best.

GigaCloud Technology (GCT) and Innovative Eyewear (NASDAQ:LUCY) could price their IPOs and start trading this week.

The U.S. Senate narrowly passed the Inflation Reduction Act. The measure, which squarely aims to cut government deficits and consumer medical bills while boosting climate spending passed by a margin of 51-50.

The Act somewhat embodies incarnations of the Build Back Better plan, albeit with a much smaller price tag in the realm of $430 billion (in place of $2.2T).

Healthcare: The measure will cap Medicare recipients’ out-of-pocket prescription-drug costs at $2,000 a year. Additional Obamacare subsidies will reduce 13M Americans’ annual medical-insurance premiums by $800. The measure also grants Medicare the ability to negotiate some bulk discounts with drug companies, which is currently something that many private companies currently do.

*The $35 insulin cap for Medicare beneficiaries will remain, but GOP lawmakers were successful in removing the provision from the private market, which could have impacts for top insulin makers Eli Lilly (LLY), Novo Nordisk (NVO) and Sanofi (SNY).

Taxes: The bill will impose a 15% corporate minimum tax on large corporations. Many of these companies report significant profits but pay little in income taxes due to credits and deductions. The Act also imposes a new 1% tax on corporate stock buybacks, though plans to tax the wealthy were removed, as well as taxing “carried interest” payments of private equity fund managers.

$80B of funding was still earmarked to the Internal Revenue Service, with the aim at improving customer service, increasing the number of audits and modernizing technology. I’m not a fan of the IRS. No additional comments needed here.

Climate investment: The Democrats continue to push their New Green Deal. Incentives like a $4,000 tax credit for the purchase of used EVs, and $7,500 for new ones, will drive up interest in companies like Tesla (TSLA) and Ford (F) that are assembling vehicles in the U.S. The new credits would apply to trucks, vans and SUVs priced under $80,000 and cars up to $55,000.

I laugh at this part – only families with adjusted gross incomes of up to $300,000 would be eligible. That’s pretty much everyone. LOL.

There are also energy rebates for heat pumps, rooftop solar, electric HVAC and water heaters, as the U.S. aims to lower carbon emissions by around 40% by 2030.