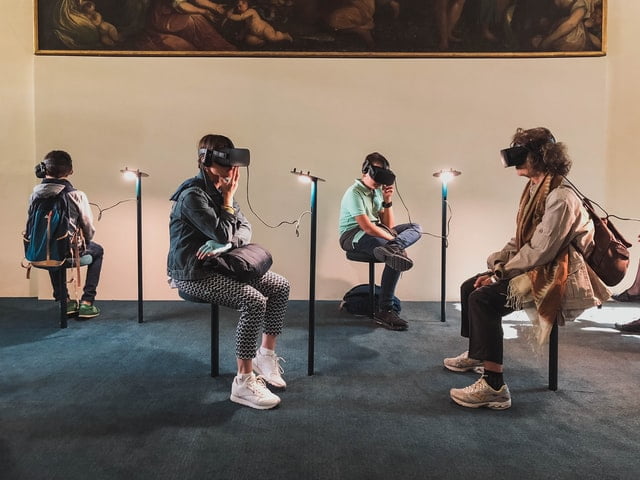 So, what is the Metaverse?

Although the metaverse has not become a “reality” yet, many do believe it is going through phases to lead to its evolution. There are many concepts floating around this topic and we are hoping to help make sense of it all. Simply, the metaverse is defined as a confluence of physical, augmented and virtual reality. Mixing all of those media formats together can help form a continuous digital presence. One where users can communicate, share experiences and exchange goods.

To put it simply, nobody knows what the metaverse will eventually look like. It may be a mix of the evolution in technology related to computer hardware, networking capabilities, payment processes, and user behavior – among other things. Many experts relate it to the convergence of the physical world and the digital world. Where we have our own persona with all the people we meet, know and grow relationships with in real life. Then many people have another digital persona they build with people through social media and the internet.

Like the metaverse, the Internet was created due to developments in network carriers (Verizon), useful browsers that can reach all webpages (think Google Chrome), and a coding language that creates the framework of the world wide web (think Java). The Internet was created and built slowly over time. It is likely that the metaverse will evolve in this way, too. As an analogy, I’d say we’re at about the mid-1990s Internet development stage when it comes to the Metaverse development.

Most have heard of Mark Zuckerburg’s plans to eventually “transition from the social network to a metaverse company”. However, even Zuck knows that this is a project that will last multiple years, at a minimum. More on this later.

Before doing much research, I had created somewhat of a story on the metaverse in my own mind. From what I have heard on the TV and podcasts, much of it seems like a sci-fi project gone rogue.

It was difficult to grasp the idea that gamers and non-gamers alike would be enticed to spend their time in the metaverse. To start, how would they be adding value to their own lives by sitting in a virtual reality game?

But then, I started to make some connections.

Today’s athletes have achieved heightened levels of fame and financial success. Much of which may be due to society’s belief that sports are something that we all can be passionate about. Whether a fair weather fan, or a die hard sports geek, many in our society spend a lot of their time watching the never-ending sports cycle. Myself being included in this mix. After all, baseball is considered America’s pastime isn’t it?

How it Compares to the Sports Industry

What are the main financial drivers of sports teams? Ticket sales are a main driver, as well as corporate partnerships / advertising, which are another. Both of these are able to help the teams pay their players large sums of money. All while maintaining a profit in the end.

Now, I’d like to compare the viewership levels of the 2019 World Series Game 7 to the 2018 League of Legends World Championship. To be fair, League of Legends is considered to be one of the most popular video games ever. It’s international reach has allowed it to build an incredibly loyal fanbase. Anyways, Game 7 between the Washington Nationals and Houston Astros brought in around 23 million viewers. Meanwhile, the League of Legends Championship summoned more than 99 million unique viewers. From a viewership standpoint, e-sports has become something for investors to reckon with.

Just as we routinely accept the fact that athletic contracts can run into the tens and hundreds of millions, if the metaverse becomes something society values, then the e-sport players will also find some level of financial success. We are already seeing it now. People like Ninja, FaZe clan (the OGs have known about them for years), Dr. DisRespect, and countless others have begun to find high levels of stardom.

In some ways, the transition to the metaverse has already started. That’s right mom and dad, maybe you should’ve let me keep playing Call of Duty past 7th grade so I could become a professional gamer.

Societal Norms Shifting to the Metaverse

Now, how many of those people would be willing to sit down and watch somebody play a game for multiple hours? That is a whole other question.

“The Metaverse Levels the Playing Field”

One concept that people seem to enjoy about the theory of the metaverse peaked my interest. It’s the idea that the Metaverse “levels the playing field” for all. However, I beg to differ. Just as in sports, the highest performing video game athletes are those who have great hand-eye coordination and high-functioning cognitive ability. Players who put in the most time to these virtual realities and effectively build their skills in these games, will be able to grow their realistic wealth through these games.

However, I believe we would be doing a disservice to the pathway of the metaverse if we looked at it strictly from the eyes of e-sport gaming. This is what makes the metaverse so confusing. The fact that it can be an infinite universe with infinite possibilities. Some may allow people to use their own wealth to purchase digital assets in the universe. If others find these assets valuable, then supply and demand will cause that property to fluctuate in value. Another interesting company filing into this space is Upland. Upland is a company trying to create their own world. In the game, players can purchase plots of land from the real world but on the game’s blockchain. To clarify, these people don’t actually own the land in reality, but they do on Upland’s platform of virtual reality. Learn more about Upland here: https://www.upland.me/.

All of this leads me to one question. What is the point? To answer that question, we may have to just wait and see what the metaverse slowly is able to become over time.

Top Companies Looking to Profit from the Metaverse

Finally, who are the companies that are taking advantage of all the space to grow the metaverse? Who is going to be the top metaverse company? From the news, you might think Facebook and Roblox are the leading horses. However, based on what I’ve seen, nobody has established a stranglehold on the overall market.

So, I would recommend keeping an eye on Microsoft, Nvidia, Unity Software, and Google. These are all main players in their respective fields. Microsoft is the leading market holder for overall software development. It will likely lead the way to the development of “the metaverse”. Nvidia is responsible for creating the processing power that will eventually be needed to play these types of games. Unity Software offers one of the most-used gaming engines that guides how virtual players move and interact. And last, Google has already begun with their Google Glasses. Where users can merge VR with the real world.

A Newcomer Establishing Itself

If you asked a random young kid walking down the street what their favorite game is right now, there is a pretty good chance you’ll hear “Axie Infinity”. This game is built on the Ethereum blockchain and is free to download. However, in order to start playing the game, the player must purchase at least 3 Axies. Axies are little gamified creatures that players use to battle other players. With a quick look at the Marketplace, Axies sell from $220, up to $2500+. Then, you can also own virtual land in the game. Amazingly, you can see that thfe average plot of land is selling for more than $10,000! Some plots of virtual land even go for more than $40,000… I don’t believe any of these people are real estate moguls in the world I’m living in, but these types of numbers will make you scratch your head.

Will this be the future of the metaverse? Will games be inherently based on the amount of money/crypto you can funnel into it? And will the average starting price to claim a spot in the game push upwards of $1000?

Now, the game is still in a growth phase, there may be a lot of panic buying going on right now. But in the last 24 hours of me writing this there have been over 65,000 Axies sold at a conservative average of $200. This would represent more than $13 million trading hands over a period of a day. Absolutely mind-boggling to think about.

In Closing… What is the Metaverse?

Nevertheless, there will be more games like Axie Infinity. Hopefully, they’ll be a little more realistic than this one. There are no clear market leaders when it comes to building the metaverse. In fact, it seems even the industry’s finest don’t know what the metaverse exactly is. It is just an idea for now. Within a highly speculative market, we recommend all our readers maintain a high level of due diligence when searching for these types of investment opportunities.

And we’ll leave you with this.

Disclosure: The Content is for informational purposes only, you should not construe any such information or other material as legal, tax, investment, financial, or other advice. Nothing contained on our Site constitutes a solicitation, recommendation, endorsement, or offer by TIW or any third party service provider to buy or sell any securities or other financial instruments in this or in in any other jurisdiction in which such solicitation or offer would be unlawful under the securities laws of such jurisdiction.