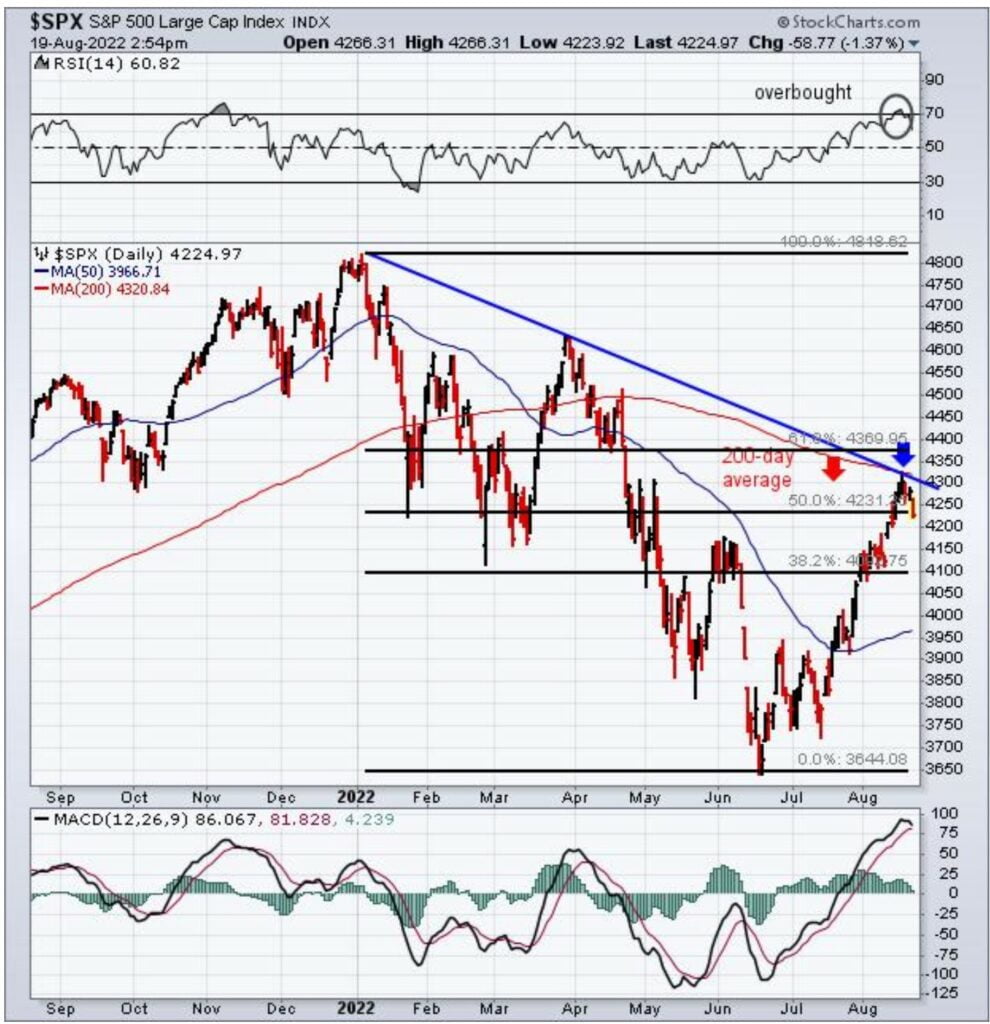 What stocks do from here is very important from a technical standpoint, and should help determine if the summer rally is just a bear market bounce or something more lasting. This is precisely where the rally in stocks should fail if the major downtrend is still intact. A 50% rebound up to 200-day moving averages and a major downtrend line represents a major test of the downtrend that started earlier in the year. Any serious pullback from current levels would suggest that the summer rally has probably run its course and would also keep the market’s major downtrend intact. That also warrants a more cautious view on stocks from current levels.

The two month rally in stocks has run into a couple of resistance lines while in an overbought condition. Last week’s the S&P 500 continued to test its 200-day moving average and a falling trendline drawn over its January/March peaks.

Chart 1 shows the SPX starting to pull back after touching both lines (note the red and blue arrows).

In addition, the 14-day RSI line in the upper box has moved into overbought territory over 70.

That combination suggests that the summer rally may have run its course and may be peaking.

The flat black lines also shows that the SPX has retraced just over 50% of its first half losses, which increases the odds that the rally has run into serious overhead resistance.

Falling bond yields have been one of the factors supporting the stock rally.

Chart 2, however, shows the 10-year Treasury yield rising above its 50-day moving average.

An upturn in bond yields could put additional downside pressure on stocks.

A couple of key sectors are also backing off from moving average resistance.

And Chart 4 shows the Technology SPDR (XLK) also pulling back from its 200-day line.

Additionally, their RSI lines in the upper boxes are starting to weaken near overbought territory.

Their daily MACD lines in the lower boxes are also close to turning negative. Volume has also been lighter during the summer rally. All of which suggests that the rally is stalling.

Chart 5 – Energy appears to be rebounding

Another factor supporting stock prices has been a pullback in energy prices and the individual equities tied to them.

Chart 5, however, shows the Energy SPDR (XLE) climbing to its highest level in months.

After rising during the first half of the year, the ratio peaked in June just as stock prices were beginning their rally. The ratio has started to rise again.

I am concerned because energy stocks are closely tied to the trend of oil. Any hint of higher oil prices might make investors more nervous about stocks.

That may also explain why defensive sectors like consumer staples and utilities were the week’s strongest sectors.