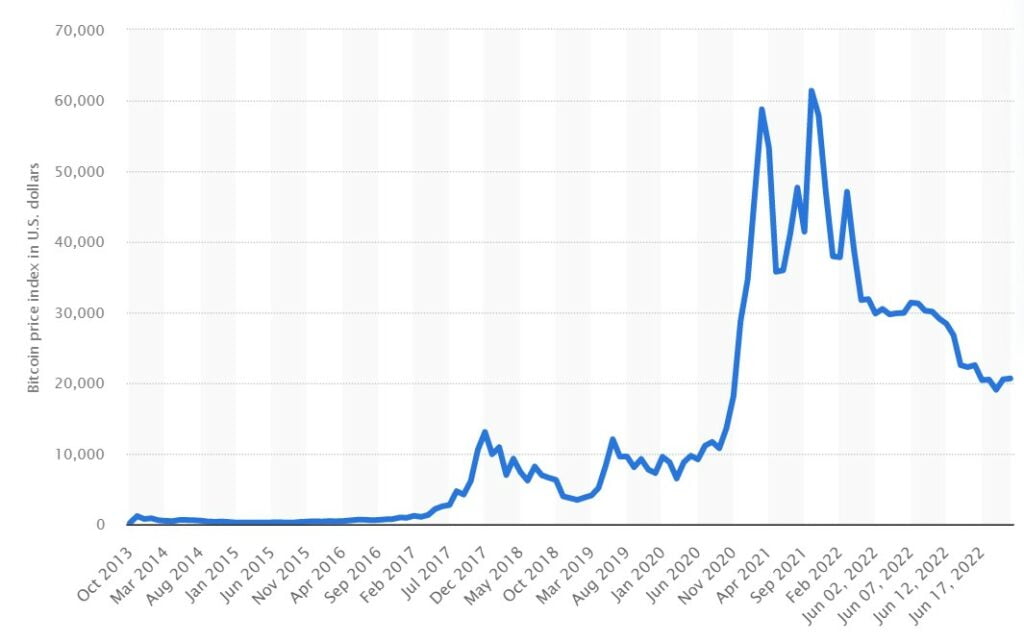 My former boss just joined a well-established player in the bitcoin & crypto space.

It’s a great opportunity. But is this the right time to make such a jump?

In the wake of the recent crypto market turmoil, I think it’s really unfortunate that people lost money. And in some ways, I truly think it will set the entire ecosystem back again because you will lose early adopters. On the other hand, the technology is here to stay and institutional investors continue to enter the space.

“If the market goes higher, everyone breathes a sigh of relief, things will get refinanced, people will raise equity, and all of the risk will dissipate. But if we move much lower from here, I think it could be a total shitstorm.” -Adam Farthing, chief risk officer at crypto liquidity provider B2C2.

Large swings continue to hit Bitcoin as the cryptocurrency struggles to hold above the key $20,000 level. The popular token plunged 15% to $17,787 on Saturday, before rebounding above $20,000 with a surge of similar magnitude on Sunday. Bitcoin is still off about 70% from the all-time high of $67,802 seen in November 2021, which preceded the Fed’s aggressive rate hike cycle.

While consumer price inflation has been perking up over the past two years to reach a 40-year high, bitcoin, for example, is off nearly 45% Y/Y and around -65% from its record peak in November 2021. By contrast, the trade-weighted U.S. dollar has strengthened by almost 14% (against a basket of major fiat currencies) over the past year. That implies bitcoin is not acting as a good hedge against inflation, while the U.S. is keeping its title as the world reserve currency.

Red flags of crypto trouble emerged in May 2022 following the complete collapse of Terra, a dollar-pegged algorithmic stablecoin project.

And growing questions about insolvency ensued after major crypto lending firm Celsius shocked the market last week by halting all withdrawals, swaps and transfers between accounts. Celsius has roughly $20 billion in assets. Celsius fell more than 50% on the announcement. Celsius had also run afoul of regulators, with some users blaming the platform for heavy financial losses by promoting them to hold CEL as collateral for loans. The digital token even promises “actual financial rewards” on its website – including as much as 30% extra in weekly returns – but the latest news is likely to dent faith in highly-touted crypto projects.

Coinbase and BlockFi have announced that they will lay off nearly a fifth of their workforce.

The crypto hedge fund Three Arrows Capital failed to meet margins calls from lenders amid a spate of bad bets. BlockFi and Genesis, two of the biggest crypto financial services groups, were among the groups that liquidated positions, meaning they reduced their exposure by taking collateral the fund had put down to back its borrowing.

There is a lot of credit being withdrawn from the system at this current moment. If lenders are forced to absorb losses from Celsius and Three Arrows, they will reduce the size of their future loan books, which means that the amount of credit available in the crypto ecosystem is reduced. Could there be a domino effect of bankruptcies and liquidations?

“It’s about time we exit this artificial world of predictable massive liquidity injections where everybody gets used to zero interest rates, where we do silly things whether it’s investing in parts of the market we shouldn’t be investing in or investing in the economy in ways that don’t make sense,” said Mohamed El-Erian, Chief Economic Advisor at Allianz. “We are exiting that regime and it’s going to be bumpy.”

These ETFs track the value of bitcoin and provide a way to invest in the cryptocurrency without dealing directly with crypto. They can be bought, sold and traded on traditional stock market exchanges instead of on cryptocurrency trading platforms. ETFs actively add and sell bitcoin to match investors investing in and redeeming from the fund.

The Purpose Bitcoin ETF was by far the largest bitcoin-focused exchange-traded product, managing almost 48,000 bitcoins before Friday’s redemptions. Now, the fund holds only about 23,300 coins.

As a result of last week’s outflows, the Purpose Bitcoin ETF (BITO) lost its top spot to the New York Stock Exchange-listed ProShares Bitcoin Strategy ETF, which holds bitcoin futures instead of spot bitcoin. BITO saw its second-largest net inflows last week since its launch last October, leading the fund’s bitcoin exposure to grow by the equivalent of 4,115 BTC. Data shows that the fund manages $668 million in assets, equating to about 31,500 BTC.

The contrast suggests that at least some U.S. investors are eyeballing the current sell-off in BTC as an attractive point of entry, taking advantage of forced sellers, for a short-term relief rally.

“Opinion amongst investors is extremely polarized, with some seeing this as a great buying opportunity, while others are spooked, liquidating positions.” – James Butterfill, head of research at CoinShares.

Crypto Regulations – There are None

The current chair of the Securities and Exchange Commission (SEC), Gary Gensler, has described cryptocurrency investments as “rife with fraud, scams, and abuse”.

Why isn’t this market regulated? Mainly because of intensive lobbying, whose largest players want the Ponzi scheme to continue.